All information about our language school in Santiago de Chile.

Our language school in Santiago de Chile is located in the popular artist and entertainment district of Bellavista, directly below Santiago’s mountain Cerro San Cristobal and South America’s largest city park. The district belongs to the Providencia district, which is known for its tree-lined streets, stylish shops, parks and many street cafes. Bellavista itself is known as a popular nightlife district with many bars, cafes, restaurants and small shops as well as museums and theaters. The language school is very well connected to the public transport network, the underground and bus stops are only a few steps away.

The colorful and cozy school building houses 12 classrooms, which together offer space for around 70 language students. There is also a computer room with free internet access and common rooms.

Our language school in Santiago de Chile has teachers with more than 30 years of teaching experience and high quality language courses. The Spanish lessons are flexible and precisely tailored to the individual language level of the students. The teachers are all native speakers with university degrees and very experienced in teaching foreign languages.

Located in the center of Santiago de Chile 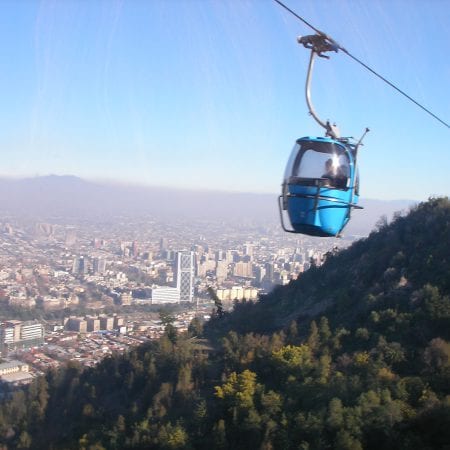 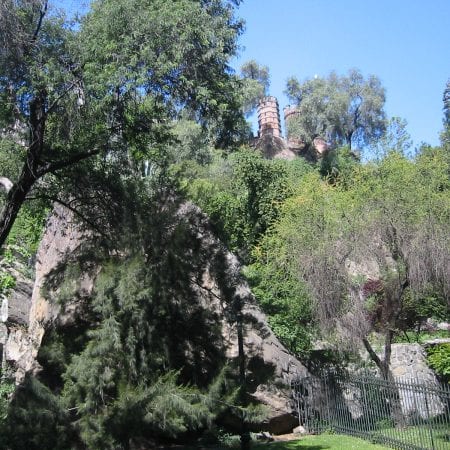 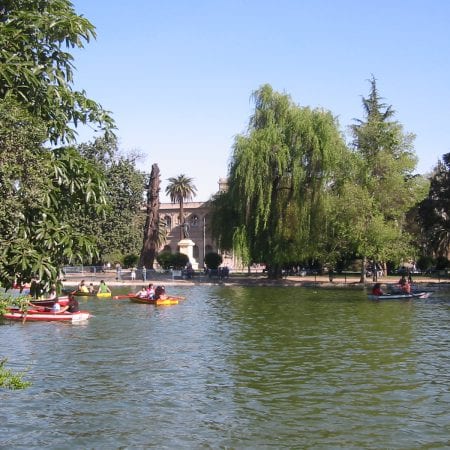 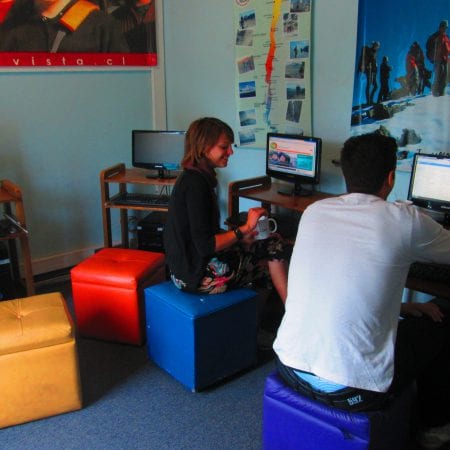 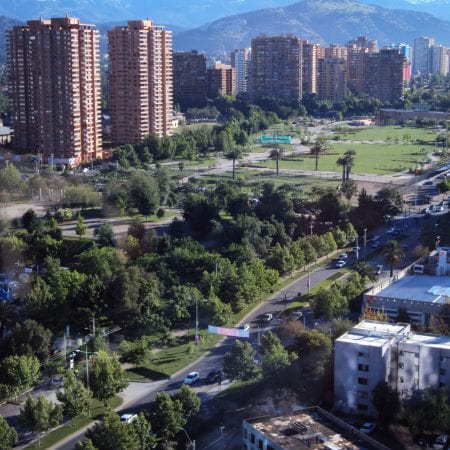 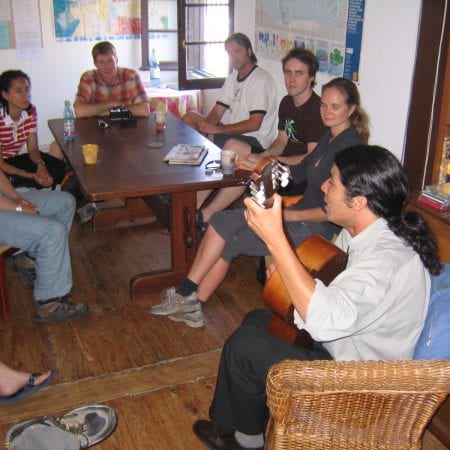 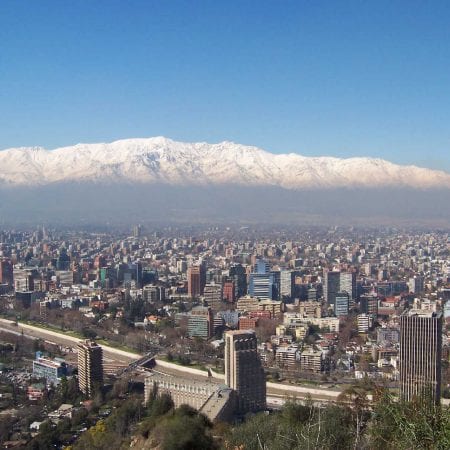 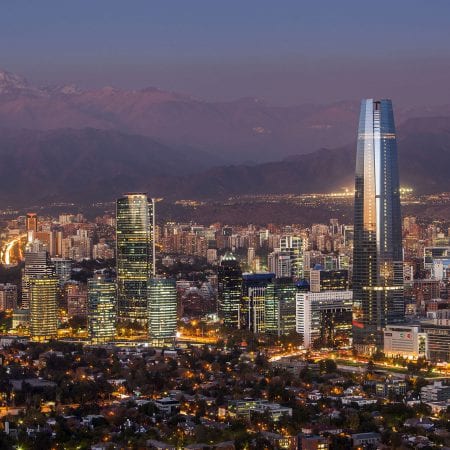 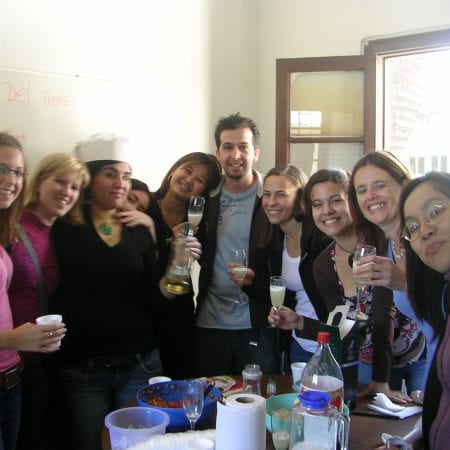 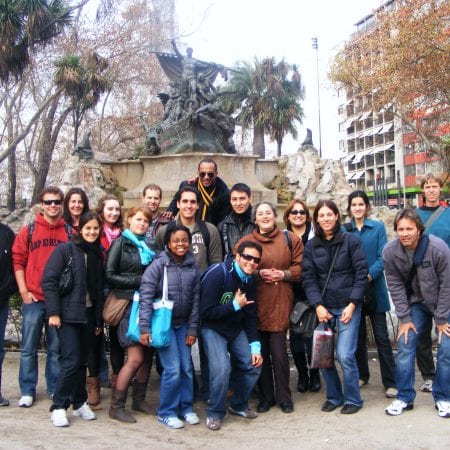 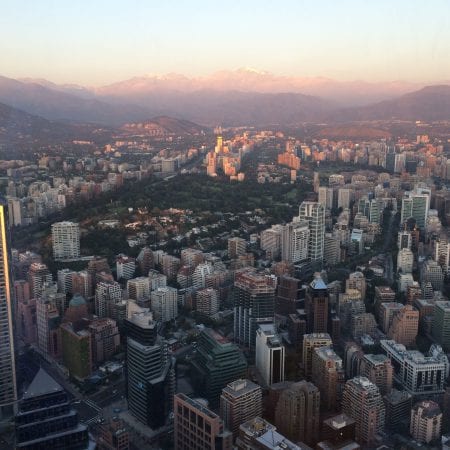 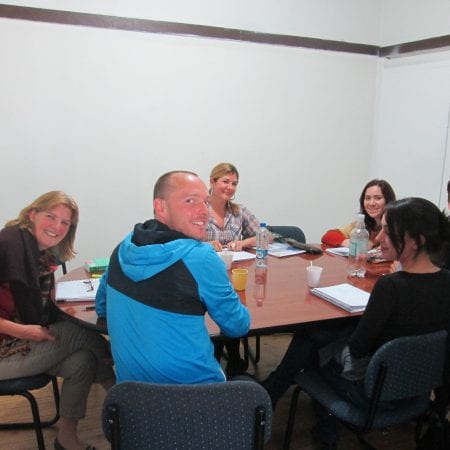 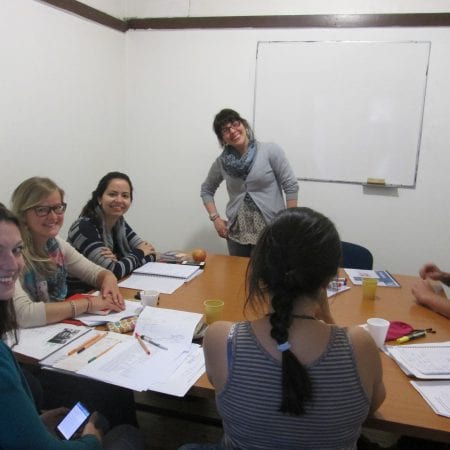 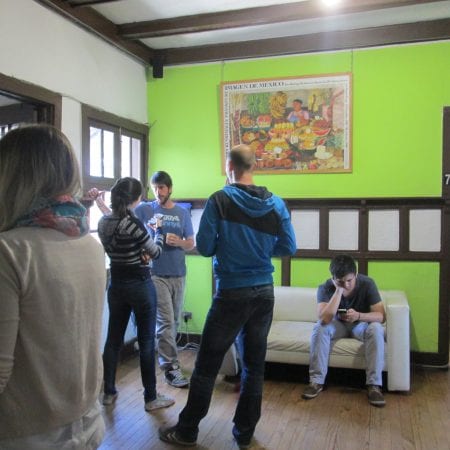 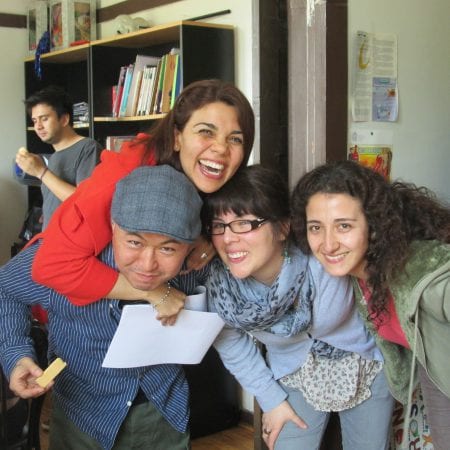 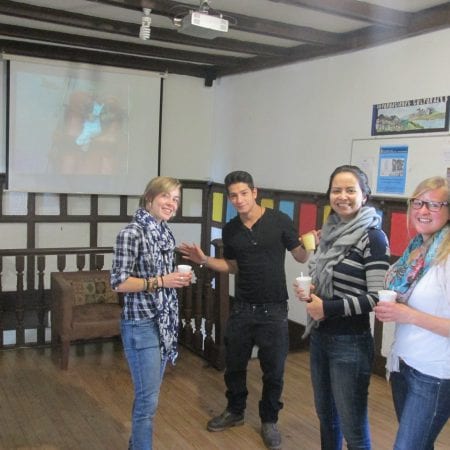 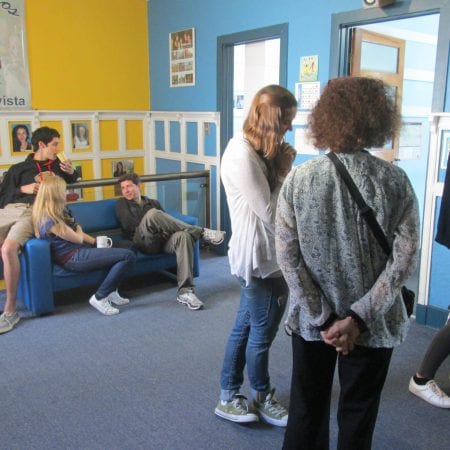 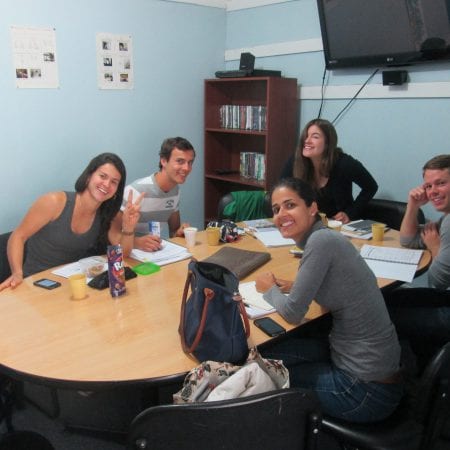 Price / week
150 USD - 190 USD
Lessons / week
20
Info
Discounts: 2 weeks: 380 USD - 3 Weeks: 570 USD - 4 Weeks: 720 USD - each additional week: 150 USD   A standard group course consists of 20 lessons of 45 minutes per week, i.e. 4 lessons per day. The maximum number of students per course is 8. Homogeneous groups ensure quick learning success and fun in the classroom. The course usually takes place in the mornings; the course is only rescheduled to the afternoon in exceptional cases. This course is chosen by many of our participants.
Read more Read less

Price / week
300 USD - 320 USD
Lessons / week
20 + 10
Info
Discounts: 2 Weeks: 640 USD - 3 Weeks: 960 USD - 4 Weeks: 1280 USD - each additional week: 300 USD   The optimal mix of group and individual lessons. An intensive group course consists of 20 lessons of 45 minutes per week, i.e. 4 lessons per day. The maximum number of students per course is 8. There are also 10 private lessons of 45 minutes per week. This course is for all participants who want to make quick progress and have the time to attend the group course in the morning and take private lessons in the afternoon. This course is popular with many of our participants.
Read more Read less

Price / week
210 USD
Lessons / week
10
Info
With a private course, you are completely flexible in terms of time and subject matter covered. Your teacher can tailor the lessons to you. The standard private course consists of 10 lessons of 45 minutes per week. The lessons follow a flexible schedule, in coordination with your teacher. A private course is ideal for participants who already have a good language level, but still have very specific areas, they want to improve, such as grammar, communication or vocabulary. It can also focus on certain topics, such as Medicine, business administration or politics.
Read more Read less

Price / week
Price of the standard group course + one time fee of 110 USD
Lessons / week
20
Info
Show social commitment and put your Spanish skills into practice right away! Especially for our language students we have created a combination program that gives you the opportunity to immerse yourself even deeper in Chilean culture and to build up your vocabulary faster. The Spanish course consists of the standard group course and always takes place in the mornings. You have a total of 20 lessons of 45 minutes each per week. Then you can get involved in a volunteer project for 2 to 4 afternoons a week. The volunteer work takes place in children's homes, day care centers, homeless shelters, animal welfare projects or similar social institutions.
Read more Read less

Price / week
On Demand
Info
This course program gives you the opportunity to learn Spanish while traveling through South America. You can choose between 6 Spanish schools in Santiago de Chile, Viña del Mar (Chile), Lima, Cusco (Peru), Buenos Aires and Mendoza (Argentina). All schools have the same curriculum and quality. You can choose the duration and type of courses as well as the order of the cities and create your program depending on your travel plan. This way you have the opportunity to get to know different cities, cultures and dialects. For all further information, we would be happy to advise you personally and make you an individual offer!
Read more Read less
Extras
Price
Language school registration fee
40 USD
Airport pick up in Santiago
40 USD
International Health Insurance – complete here: Link
see link

All accommodations for our language students in Santiago de Chile are very carefully selected and are located in good and safe residential areas. Good transportation connections and internet are always available.

Santiago, the capital of Chile, is the heart of the nation with almost 6 million inhabitants and one of the most important financial metropolises in Latin America. The city has many aspects in both cultural and architectural forms. Traditional neighborhoods, well-tended mansions and colonial buildings compete with modern office complexes, bold skyscrapers and the modern subway system. You will find huge shopping malls, but also small noisy street markets with native handicrafts.

From Santiago there are numerous outdoor opportunities within an hour, such as climbing, rafting, bathing in hot springs or trips to several ski areas (June-September). The Pacific coast is also only an hour away. Many Santiaginos use the proximity of nature in the summer (December-February) to escape the noise of the big city for a weekend and go to the mountains or to the beaches.
The Santiaguinos are friendly and helpful people, which makes it very easy for foreigners to make friends. Santiago de Chile is also the location of numerous universities, which has led to a lively international student life in recent decades.

Sights in Santiago de Chile definitely include the hills Cerro San Cristóbal and Cerro Santa Lucía, the presidential palace Palacio de la Moneda, the Plaza de Armas and the Mercado Central. In particular, the Bellavista district, the Providencia district and the modern, wealthy district of Las Condes are worth being explored.

522 meters above sea level, approx. 100 km east of the Pacific coast in the middle of Chile

Founding of the City

The city was founded February 12, 1541 by the Spanish conquistador Pedro de Valdívia

The hills of Cerro San Cristóbal and Cerro Santa Lucía, the presidential palace Palacio de la Moneda, the Plaza de Armas and the Mercado Central are a must. In particular, the Bellavista district, the Providencia district and the modern, wealthy district of Las Condes invite you to be explored.

Santiago has an exciting, distinct nightlife. The best days are Thursday, Friday and Saturday. The nightlife is spread over different districts, but mainly in Bellavista, Providencia and Nuñoa.

Like every metropolis of millions, Santiago offers a lot of variety in every respect. The city is very clean and safe. The close proximity to the Andes and the Pacific (approx. 1 hour each) increases the recreational value tremendously.

You can find pictures of Santiago de Chile in our picture gallery.

In addition to language courses, our language school in Santiago de Chile offers a wide range of leisure activities. Every day there are various options for spending free time and every week a new program: 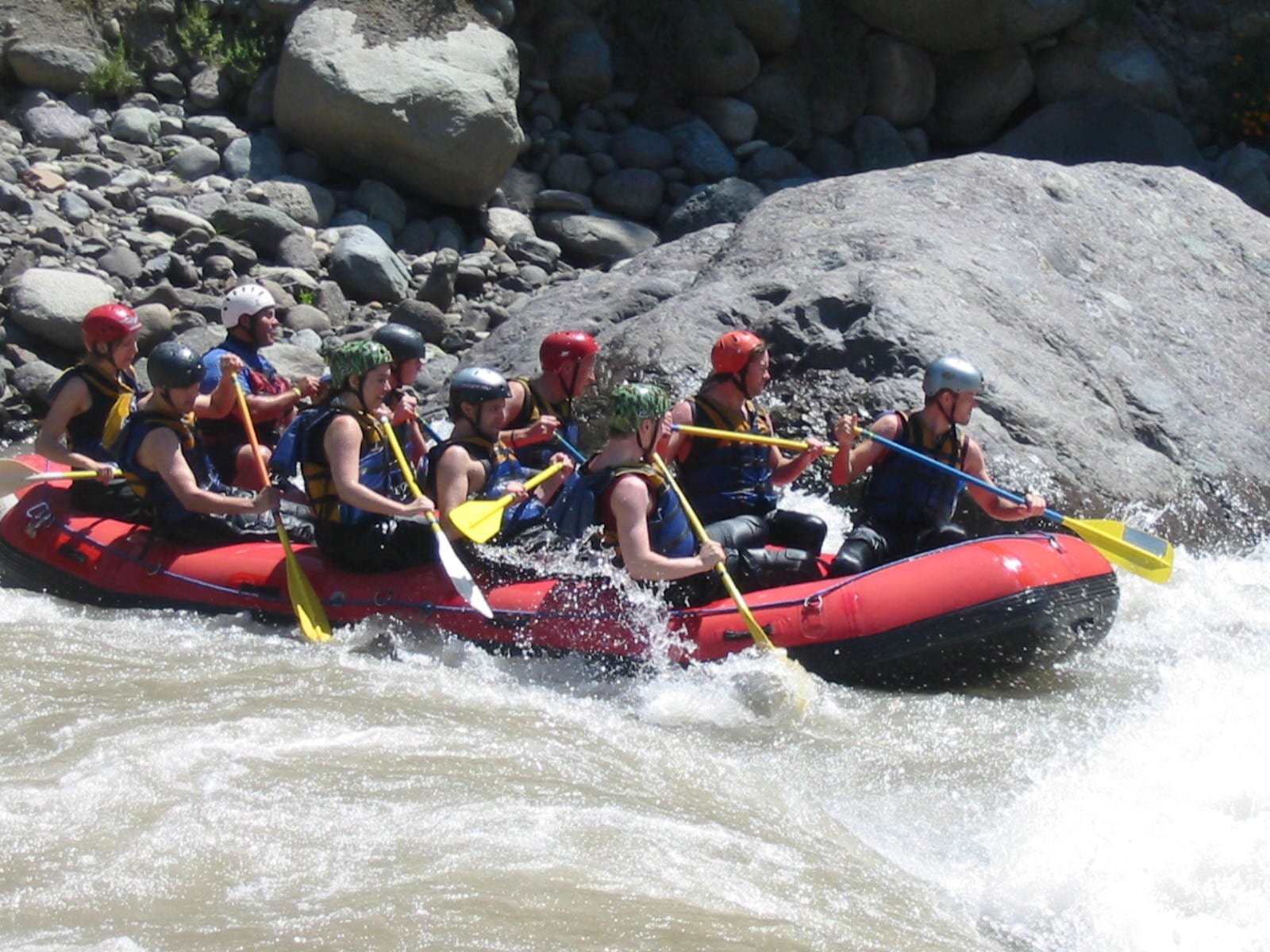